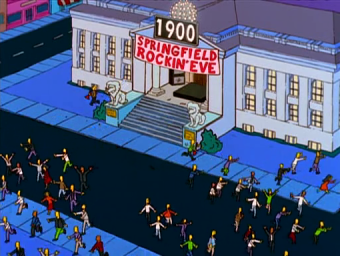 "They say two thousand zero-zero, party over, oops, out of time
So tonight we're gonna party like it's nineteen ninety-nine"
— Prince, "1999"
Advertisement:

Supposedly, on January 1, 2000, the world was going to be destroyed by a computer glitch known as the "Millennium Bug" (also referred to as "Y2K" or the "Year 2000 problem"). This bug involved numerous computer systems misinterpreting the year 2000 as 1900, resulting in planes falling out of the sky, satellites going wrong and all the calculators going to silicon heaven; the most extreme fears involved an accidental nuclear war, or even machines coming to life and attacking humans like something out of The Terminator. Most of the actual problems were just cosmetic, such as programs displaying the year after "1999" as "19100,"

or desktop internal clocks resetting to 1981 as a crash-preventing exception.

Here's the background: in the early days of computing, computer memory and disk space was extremely expensive. By comparison, a gigabyte of RAM (roughly 1.4 million kilobytes) for your computer is maybe $15 today, and a two-terabyte (about 20,000 times 100 megabytes) hard drive (about the size of two packs of playing cards) might be $100 or less. But back in 1970, one kilobyte of RAM was about a thousand dollars, a 100-megabyte hard drive (about the size of a dishwasher) might have cost $12,000, and replacement disk packs (a foot high and the circumference of a dinner plate) were around $800 (for comparison, a brand-new VW Beetle was just under $2,000). So computer programmers needed to find ways to use less internal RAM and disk space in storing information on a computer. One way to save money was to store dates in short form; so all dates were typically stored internally in six digits (punctuation was added at display time), so November 27, 1960 was coded as 112760. Now, a month later, you can get by adding 1 to the second digit. The new date is later than the original one. However, if you have a date of November 15, 1992 (111592) and add eight years to it, you get 111500 or 111600, depending on how it's stored, which, if the program wasn't prepared for it, would not read it as 2000, but 1900. Either the difference between the two is a negative amount or instead of eight years' difference being computed, 92 years are computed. The issue here is that if you bought something and charged it to your credit card on the last week of 1999 and your bill came in a month later, you might get billed for 99 years of compound interest at 21%. It'd be like the Evil Counterpart of the Compound Interest Time Travel Gambit.

This was especially considered serious in the case of process software. Say you're cooking chemicals in a plant that runs 24/7, where you have to heat a batch for exactly 37 hours at 1200 degrees, then move to the next process. When the calendar turns over, either the batch gets kicked out too soon or it sits in too long and potential explosions could occur, or perhaps a batch of something that costs hundreds of thousands of dollars to make (and would have been sold for several million) is ruined. Or a system checks the date, realizes it's been running for 99 years with no maintenance, and shuts itself down for safety. If it happens to be the equipment that runs the electricity for your grid, you've got no power in the middle of winter (or summer in the Southern Hemisphere, which is just as bad if not worse, since at least you can heat your house without power; air conditioning pretty much needs electricity, and no AC means heatstroke in many places). There were also other potential scenarios, all worst case. Of course, planes, satellites and calculators didn't do that, much to the joy of aviators, astronomers and calculus students. But the bug was an opportunity for writers to come up with doomsday stories, and a few of them even wrote about actual insects (groan-worthy as that may sound). Some newspapers even had a weekly column in their tech section throughout 1999, detailing how things were going in the battle against the bug.

Finally, January 1, 2000 arrived. Aside from a few glitches here and there, not much happened — certainly nothing that could be called "apocalyptic". Nowadays there's a retrospective debate on whether Y2K was blown out of proportion by people looking for an excuse to panic, by the computer industry that was looking to sell people upgrades to their hardware and software with the promise of Y2K compatibility, or by people looking for an excuse to damn the demon computer; or if the disaster was indeed a possibility and was only averted by thousands of man-hours of programmers (mostly COBOL, which isn't really used for safety-critical software) working tirelessly to avoid a technological apocalypse. Although some dangers such as planes falling out of the sky were pretty much fabricated,note The only real possibility for that is if said plane was taking off or landing and the computer crashed. If it was cruising in the air, the pilots would have plenty of time to switch to manual control and fly it themselves if needed. the effects on the economy of a plausible worst-case scenario would still have been immeasurable. In addition, the Y2K preparations also had the effect of causing a lot of companies to rethink their emergency plans, helping them get back on their feet faster after events like 9/11 and the 2003 Northeast US blackout.

The fears over the bug did lead to companies purchasing new hardware sooner than they otherwise would have, leading to a tech boom followed by a bursting tech bubble in the early 2000s. A lot of work in the late 90s went into reprogramming retrograde systems worldwide so that they no longer depended on two-digit years in their dates, meaning there was an extent to which Y2K was as much quietly prevented by coders and developers as it was overhyped by mass media. Regardless of the aftermath, Y2K nonetheless provided an interesting look into the mindset of people who are faced with an oncoming problem of global proportions.

The Millennium Bug is one of the more famous examples of an Overflow Error. For the sequel to the Bug itself, watch for the Year 2038 problem

(when the UNIX system time integer exhausts its 32 bits). Fortunately, by that point, we'll certainly be using 64-bit time;note And we won't have to worry about THIS issue until the year 292,277,026,596. however, many embedded systems still use 32-bit time as of now. Due to increasingly rapid change of digital technology, especially on embedded systems, they tend to be replaced for low prices (or in the case of offline museum material, have the time rewinded). And if you're willing to wait much longer, refer to the Year 10000 problem, as clocks aren't used to handling five digit year numerals.