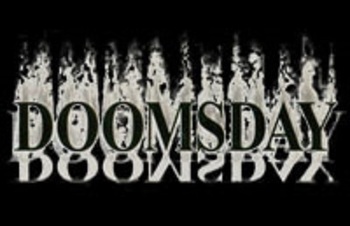 Go on a journey through the warped underground of New York City as the impending arrival of the Millennium brings out the worst in the city that never sleeps.

Doomsday was a haunted house from Universal Studios' Halloween Horror Nights 1999, located in the Earthquake queue along with The Mummy. According to a cast member

, it was originally meant to be based on the movie End of Days before the license was pulled. The story was that a large number of people had fled into the New York subway to hide for the turn of the millennium, with the worst and strongest attacking anyone passing through to defend their territory.

At one point guests walked through a subway with scattered blood splatters and zombie scareactors reaching for them through the windows. There was also a "sanctuary" with a heavily-bleeding woman tied to a pole and robed scareactors in pews.

Not to be confused with the identically-named haunted house from 2008, which was based on the actual movie Doomsday.