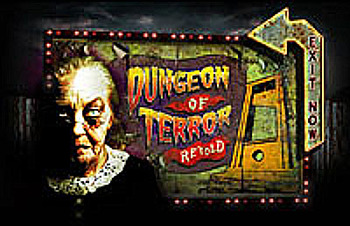 The entrance to the house was a castle with a cage with a woman hanging above. On top of the castle were scareactors who would yell at the people who were below them.

Due to the house's age, a reliable, detailed walkthrough is not available. However, enough old first-hand accounts exist to get an idea of the experience.

The house was designed to take twelve minutes to get through, but in practice the number was closer to five-eight minutes. The walls were bloodied, and the beginning contained a six-foot spider hanging above the guests. After leaving the spider room, the guests would be terrorized by a scareactor portraying a homicidal maniac. One of the scenes had the guests walk on The Rat Lady's glass coffin, with the Lady scratching at the glass and screaming for help. Another room had pliable walls closing in enough to touch the guests, making them feel like they were being crushed.

The corridor started to tighten as scareactors could be seen near the walls. At one point, a room where a man got hanged behind a chainlink fence was entered. At another, a person inside of a coffin reached out and asked the guests to let them out.

The Cryptkeeper's Dungeon of Terror was set in the Cryptkeeper's Mansion. The house featured many different rooms of his mansion including the Root Cellar, the Trophy Room, and the Parlor. It's reported to have been very similar to the original house, with little more added than statues and characters resembling the Cryptkeeper. One difference however was that the guests would enter the house via The Root Cellar, rather than entering the dungeon directly like in previous versions. The house was long and Gothic with varying lighting and few illusions. In the beginning of the house the Cryptkeeper was sitting above the guests as they passed under him, and the Trophy Room had many heads on the wall staring at them as they walked by. At one point, the guests would walk through a cemetery. The Rat Lady appeared in the final room.

Dungeon of Terror and its sequels contains examples of: