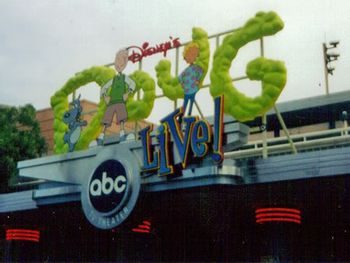 Doug Live! was a 30-minute stage show at Disney-MGM Studios (now Disney's Hollywood Studios) in Walt Disney World, based on the show with the same name. The characters performing were Doug Funnie, Skeeter Valentine, Patti Mayonnaise, Roger Klotz, and Porkchop, as well as pre-selected audience members to play Quailkid (one kid), and The Beets (four adults). There was also an animated screen behind the cast at some points, and during certain musical numbers would show other characters from the show (Chalky, Beebe, Judy, etc.). It opened in January of 1999, a few months before Doug's 1st Movie was released in theaters, and replaced the SuperStar Television show, which had opened with the park in May of 1989.
Advertisement:

The musical begins with the title character writing in his journal about everything that happened since moving to Bluffington, and goes into a musical number ("21 Jumbo Street") that introduces the characters. Skeeter comes over shortly after the song, and tells Doug about a contest on the radio giving away free tickets to the final break-up concert by The Beets. Doug ends up winning the contest, and gets two tickets. Skeeter mentions that Doug should ask Patti to go with him, which Doug agrees with.

The scene switches to the next day at Beebe Bluff Middle School, as Doug tries to ask Patti to go to the concert with him ("Anybody Else at All"). He turns to Skeeter for advice, and Skeeter pulls out "The Really Big Book of Dating for Boys" to give Doug some tips. He takes Skeeter's advice and attempts to ask Patti with saying romantic phrases to her, but she thinks they're just playing around. Roger shows up and asks Patti to go with him to the concert with his tickets, and she agrees, as Doug hands the tickets to Skeeter, brokenhearted.

The next scene has Doug upset about what happened, as he has a Quailman fantasy. In it, Roger, as Dr. Rubbersuit, has kidnapped Patti so Quailman can rescue her, falling into his trap to lower his self-esteem and fuel his ("Pump me Up"). Losing his self-esteem, Quaildog communicates to Quailman telepathically to tell him help is on the way. Quailkid comes and tells Quailman that he/she believes in him, and the audience does the same. Quailman finally regains his power to defeat Dr. Rubbersuit.

Doug snaps out of his fantasy in time for the concert, and he and Skeeter try to enjoy it until Roger jumps onstage and security has to get him off ("You Make the Call") (song barely audible). Doug meets up with Patti at the end of the concert, and walks her home. She tells him that Roger thought it was a "date-date" and she didn't. She also tells Doug that he'd be the kind of person she'd like a "date-date" with ("Someone Like Me"). At the end, Doug finishes his journal entry for the final song ("21 Jumbo Street (reprise)")

This was one of the only One Saturday Morning themed attractions at any Disney park, and Doug and Patti were the only characters from the block that were there for meet 'n greets (outside the theater the musical was), if characters from shows based on pre-existing franchises don't count, meaning that it was never possible to get your picture taken with Pepper Ann or T.J. Detweiler, which says something about the show.

The musical ended in April of 2001, around the same time that the series was removed from One Saturday Morning. After being used mostly as a special events venue, the theater that housed the show eventually became The American Idol Experience in 2009.