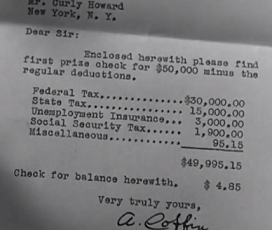 Sounds fair.
"Let me tell you how it will be,
There's one for you, 19 for me.
'Cause I'm the taxman, yeah, I'm the taxman!"
— "Taxman" by The Beatles
Advertisement:

Congratulations! Through either winning a sweepstakes, the lottery, or an Unexpected Inheritance, you're suddenly rich! But, don't celebrate too soon; a man from the Intimidating Revenue Service will be along shortly to inform you that after federal taxes, state taxes, employment taxes, property taxes, and miscellaneous additional fees, your winnings have dwindled down to nothing. Heck, you may even owe money.

Basically the government's equivalent to Cut a Slice, Take the Rest. This is almost exclusively an American trope, given the reputation the Internal Revenue Service has (justified or not) for coming up with any reason at all to seize large chunks of money from the suddenly wealthy. This may be because it's a lot easier than reforming tax laws to make the long-term wealthy pay properly. The US is also fairly rare in that its lottery jackpots are still taxed as regular income.note In Canada, to compare, taxes are taken from the sales of lottery tickets, therefore prizes are considered to have already been taxed, so no taxes for payouts. Story-wise, this trope can be used to keep a character in Perpetual Poverty and maintain the status quo while giving them a small taste of the wealthy life. But of course, woe be to the character who already started spending large sums of their cash before they get the news that they can't keep most of it.

A somewhat rare variant involves someone finding Buried Treasure, which is Truth in Television for a lot of countries because anything of significant archaeological value is automatically seized by the state in order that it be studied by qualified historians and eventually placed in a museum. However, in real life this tends to include a finder's fee, often equal or even greater than what the item would fetch at auction. Fictional examples often forget to mention this for Rule of Funny purposes.

Mildly Truth in Television, as prizes are part of Other Income on US tax forms, which, unless you're obscenely wealthy or extremely bad at filling taxes out, isn't going to lose more than 30% to taxes, and inheritance taxes only kick in for the part that's above $5 million since 2011, so both would leave plenty of value for the recipient. (However, this was much more Truth in Television in works from the 1940s to 1980s, when marginal income tax rates were as high as 91%.) For perspective, in France, prizes are not considered income on the year you win them, whereas inheritance taxes and deductions can vary a lot depending on your relation to the deceased person, from nothing if you are the widow(er) or legal partner of the deceased, to 60% for an unrelated (i.e. without family ties) stranger. Fiction just likes to exaggerate it for comedic purposes.

See also A Fool and His New Money Are Soon Parted. A subtrope of Yank the Dog's Chain.