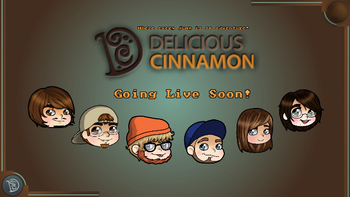 "Where every jump is an adventure."
Advertisement:

DeliciousCinnamon is a group of friends that play video games together. Initially starting out on YouTube

and occasionally streaming on Twitch

, they later began producing most of their content live streaming through hitbox (now rebranded as smashcast.

It was started up by: Robert "Bert" Lindert with his friend David "Dubz" Knapp, with Dezz, Mysh, Juan, and Adam as the other members. With the move to live streaming, the channel now mainly features Dubz, Dezz, Minimoose and Alexa.

The channel became popular from a Let's Play of Pokémon Vietnamese Crystal *  often called Viet Crystal , a "Blind Idiot" Translation of Pokémon Crystal from Vietnam. Since then, they have branched out into Let's Plays and live streams of other games as well.

Their collective lineup of games includes:

For 2017, they announced that they have stopped with full-time streaming on the official channel. Dubz has continued streaming on his personal channel

, playing a variety of games as well as finishing some of the games played on the main channel.

They also have a fan made wiki

, though it seems to have been abandoned.