The Snack Is More Interesting 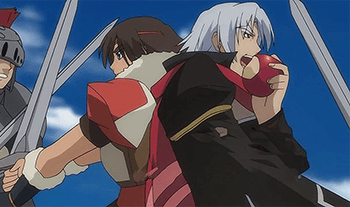 "The director said 'Here, eat an apple. It'll make you look like even more of an asshole.'"
— Jeremy Scott, the narrator of CinemaSins, on several occasions

A character enters what should be a serious situation for them, and yet seems completely bored with the events. Instead of giving the occasion his full attention, they seem more invested in the snack they happen to be eating. Apples, potato chips, or any other food that's particularly noisy are popular for this since the obnoxiously loud crunching can drown out what's going on around the eater.

Apples and other fruit carry an additional "eff-you" quality in that, well, you can't be admonished for eating something healthy, can you? Alternately, apples are often associated with the Book of Genesis, for times when you want to draw parallels between a less virtuous character and Satan.

Compare Autopsy Snack Time, Fruit of the Loon, Obsessed with Food, Inappropriate Hunger, Delicious Distraction, Long Speech Tea Time (where an audience is bored), Pass the Popcorn (where they're entertained by someone else's troubles), and Impromptu Campfire Cookout. Often overlaps with Enemy Eats Your Lunch.

Contrast They Wasted a Perfectly Good Sandwich, where a mealtime conversation is so interesting the food goes completely untouched.

Cartman is one of the only boys unaffected by the waitresses' charm as he focuses more on the food instead.

Cartman is one of the only boys unaffected by the waitresses' charm as he focuses more on the food instead.