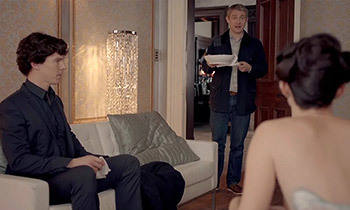 "You could have chosen any random number and walked out of here today with everything you worked for. But you just couldn't resist it, could you? I've always assumed that love is a dangerous disadvantage. Thank you for the final proof."
— Sherlock Holmes
Advertisement:

The story starts off with the cliffhanger of Series One: Moriarty's got multiple snipers trained on John and Sherlock, who's aiming John's gun at a Semtex-laden coat at Moriarty's feet. And then Moriarty's phone goes off to the sound of "Stayin' Alive". After ranting a bit, he calls off the snipers and leaves Sherlock and John, having received a better offer from someone else.

But who was that someone else? Cut to a woman in a lacy thong putting away an expensive phone, picking up a riding crop and entering a bedroom containing a woman tied down to a bed. "Well then, have you been wicked, Your Highness?"

Sherlock and John return to solving cases, with Sherlock shunning the boring ones and John blogging about their adventures. This gains the duo notoriety, and according to John, attracts clients.

Sherlock goes to Adler's residence, but his cover story is promptly blown when Adler appears naked in front of him, stunning him and flummoxing his Sherlock Scan. Throw some CIA spooks into the mix with a hidden safe, a locked phone and a booby trap, and Sherlock realises that there is more in the phone than just compromising pictures. However, Adler drugs (and whips) Sherlock and gets away with the phone.

What then follows is an adventure where Irene Adler and Sherlock Holmes match their wits, and deal with their intellectual attraction to each other, while Watson acts like a Deadpan Snarker watching from the sidelines, and Sherlock is right; there is more to the phone than meets the eye.