Stealing from the Hotel 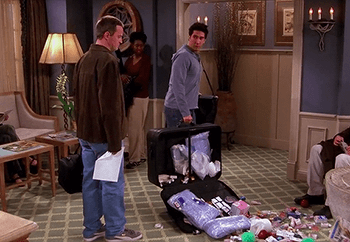 "Sure you got enough complementary chocolates, Ross?"
Everybody is corrupted by hotel rooms. You can't help it! It's the only place in the world where you walk in and the first thing you do is steal everything before you take your coat off.
— Dylan Moran
Advertisement:

A character steals items from their hotel room that are meant to be left behind for the next guest, such as towels, robes, ash trays and unused toiletries. This is usually played for comedy, showing that the character is petty, rude, cheap or without class. It often results when a character is staying at a much nicer room than they can usually afford.

This can be exaggerated by taking larger or more valuable items, such as the TV or furniture. In some cases, the character fills their suitcase with the hotel's items, leaving no room for the belongings they came with. If confronted, expect the character to justify the theft using some sort of Loophole Abuse— for example, stating that there's no signage prohibiting the removal of the items.

In Real Life, a lot of these items can't actually be "stolen" because they are meant for the guest to take, like shampoo and bathroom soap. Many locales have laws that require the hotel to throw these out after every guest checks out, so if you don't take them they're just going to wind up in the trash. For the items that you're not supposed to take, most hotels require a credit card be kept on file so the costs will simply be added to your bill after the hotel realizes they're missing. If the work recognizes that hotels now keep a credit card on file, expect part of the story to revolve around them trying to replace the stolen items with a cheap substitute so the hotel won't notice what happened.

This can a way to Poke the Poodle. Another form of petty theft is Stealing from the Till.