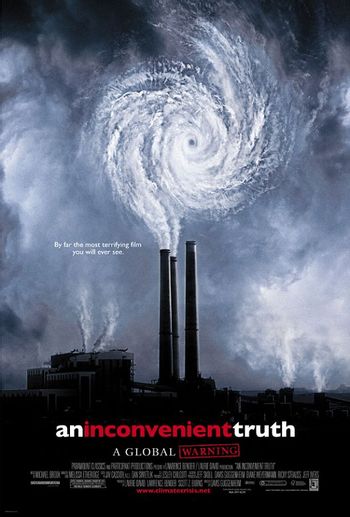 It's the evil hurricane factory. And only you can slow it down.
"In 39 years, I have never written these words in a movie review, but here they are: You owe it to yourself to see this film."
—Roger Ebert in his review

An Inconvenient Truth is a 2006 documentary presented by former U.S. vice president Al Gore and directed by Davis Guggenheim.

It deals with the threat of global climate change. The title stems from a quote stating that people will not believe something, even if it is true, if their livelihoods depend on them not believing it — used here in reference to the energy industry and other polluters. A companion book was created titled An Inconvenient Truth: The Planetary Emergency of Global Warming and What We Can Do About It.

An Inconvenient Truth is the eleventh-highest grossing documentary film to date in the United States.

It would later see a sequel in 2017 entitled An Inconvenient Sequel.