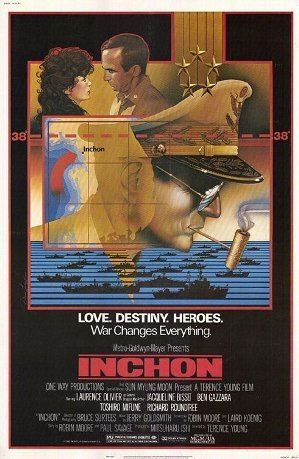 Inchon is a 1981 film directed by Terence Young about The Korean War, set during the 1950 Battle of Inchon between the U.S., led by General Douglas MacArthur, and the North Koreans.

The plot concerns USMC Major Frank Hallsworth (Ben Gazzara), an American soldier stationed in South Korea, who, along with a Sergeant under his command, Augustus Henderson (Richard Roundtree), gets drawn into the conflict when the North Korean forces invade. Meanwhile, Frank's estranged wife, Barbara (Jacqueline Bisset), is trapped in the combat zone and tries to get to safety, and General MacArthur (Laurence Olivier) settles into his new role as the lead General of the upcoming military operation, while struggling with fears of being too old to handle such an undertaking. Throughout the movie, we also get glimpses of Park (Won Namkung) and Mila (Lydia Lei), a young Korean couple who are about to be married, but get separated by the war. All in all, it is a mixture of action, romance and drama.

The movie was a Propaganda Piece funded almost entirely by Rev. Sun Myung Moon and the Unification Church. Its followers being known as "Moonies," they are one of the largest and most famous cults in the western world, right behind Scientology. Moon was one of the richest men in the world, owned The Washington Times, claimed to be the messiah, and was famous for his mass weddings, in which devotees were led into a room where the Rev. Moon randomly paired up people. His son, named Kook Moon, more often known as Justin, also owns a pistol manufacturer.

Why make a movie about the battle of Inchon? Well, it was apparently a choice between this or making a movie about Jesus or Elvis Presley. That is not a joke. Then a fortune teller claimed that she spoke to MacArthur, who gave Moon the personal go-ahead for Inchon. Moon wanted to show a pivotal moment in Korean history as well as portray MacArthur as a deeply spiritual man. The end goal of Inchon was to be the start of a series of ten or so movies about the Bible.

Following a long and very difficult production, the film only had a limited theatrical release, getting pulled from theaters quickly because of poor box office returns. Laurence Olivier in an interview declared that the only reason he took part of this picture is "Money, Dear Boy", which became a Trope Namer for this wiki. Moon wanted to keep his involvement a secret since the Unification Church is perceived as a cult, so all of the actors and crew were paid in cash, including Olivier, who was paid $1.25 million, plus overtime, in deposits of several briefcases. It has never been released on home video, and is only available in VHS recordings ripped from the Unification Church's former TV network, the GoodLife Network (now YTA TV).