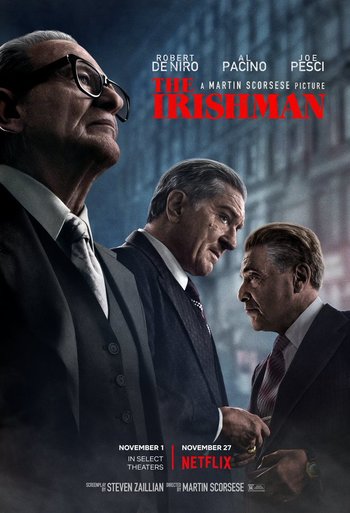 "In the still of the night..."
"Big business and the government are working together, trying to pull us apart. Something's got to be done."
— Jimmy Hoffa
Advertisement:

The Irishman (alternatively titled I Heard You Paint Houses) is a 2019 crime biopic film directed by Martin Scorsese. After years of trying to get it off the ground, it was eventually produced by Netflix, and was released on the streaming service on November 27, 2019.

The film tells the story of Frank Sheeran (Robert De Niro), an Irish-American mob hitman and World War II veteran who developed his skills during his service in Italy. Now an old man, he reflects on the events that defined his career as a hitman, particularly the role he played in the disappearance of his longtime friend, labor leader Jimmy Hoffa (Al Pacino), and his involvement with the Philadelphia crime family led by Russell Bufalino (Joe Pesci).

The Irishman contains examples of:

You Know What You Did?!

The Kennedys are getting to Jimmy Hoffa and the recent actions of his employees are not helping one bit.

Example of:
Surrounded by Idiots

You Know What You Did?!

The Kennedys are getting to Jimmy Hoffa and the recent actions of his employees are not helping one bit.