Theatre / I Married an Angel 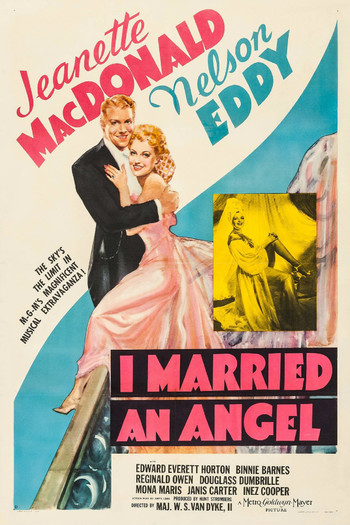 I Married an Angel is a 1938 musical comedy created by Richard Rodgers and Lorenz Hart. It was adapted from a play by Hungarian playwright János Vaszary, entitled Angyalt vettem feleségül. In 1942, MGM adapted it into a musical film directed by W. S. Van Dyke II, starring Jeanette MacDonald and Nelson Eddy.

The show stars Count Willie Palaffi, a wealthy banker from Budapest with a bad love life. Although he's engaged to a lady named Anna Murphy, he ends this relationship, as he believes that nothing less than an angel would be marriage material. Lo and behold, a real angel swoops into his life, and matrimony is imminent.

There's just one small catch: angels are completely free of human failings. Especially lying. This is rather inconvenient for Willie, as due to his wife's complete honesty about people's bad habits and appearances, his bank is losing its greatest customers. Will Willie lose the bank? Will the angel become a little more 'earthly' and learn to lie? And will the attempts to fix these problems drive Willie and his angel apart? You'll have to watch the show to find out!

Alternative Title(s): I Married An Angel