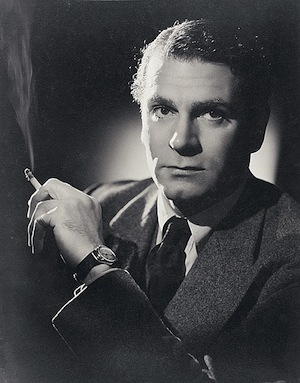 "And though
I'm no Olivier
If he fought
Sugar Ray, he would say
That the thing
Ain't the ring, it's the play
And though I could fight
I'd much rather recite
That's entertainment!"
— Jake La Motta, Raging Bull
Advertisement:

Laurence Kerr Olivier, Baron Olivier of Brighton (22 May 1907 – 11 July 1989) was an English actor and director, who was considered in his lifetime to be the greatest actor of his generation.

On stage, he was unanimously seen as a genius actor and director. In cinema, he hit a peak in his early films, including an Academy Award-winning performance as the title role in Hamlet (1948), which he also directed. Hamlet also won Best Picture (the only film spoken in Shakespeare's dialogue to win to date) and earned Olivier a Best Director nomination (making him the only person to direct himself to an Oscar until Roberto Benigni matched the feat for Life Is Beautiful fifty years later).

As a film director, he's best known for his three William Shakespeare adaptations. In addition to Hamlet, there's Henry V (1944) and Richard III (1955), both of which were shot in Technicolor, featuring impressive cinematic spectacle for its time, and still considered among the best Shakespeare films. His turn as Richard III in particular proved to be one of his most iconic and much-parodied roles, famous for his Breaking the Fourth Wall monologues to the camera. He was nominated for the Best Actor Oscar each time and it more or less cemented him in Pop-Cultural Osmosis as "the" Shakespearean actor.

He was married for 20 years to Vivien Leigh and often starred with her on stage and screen. Often compared to Kenneth Branagh, another stage and screen star who directed himself in cinematic versions of Henry V and Hamlet. In what was perhaps the logical extreme to both their careers, Branagh netted an Academy Award nomination for playing Olivier in My Week with Marilyn, a film about the difficult production of The Prince and the Showgirl, which co-starred Olivier and Marilyn Monroe.

Trope Namer for Money, Dear Boy, which was his response to why he appeared in Inchon. The Laurence Olivier Award for Best New Play is given every year to the best new play on the London stage.