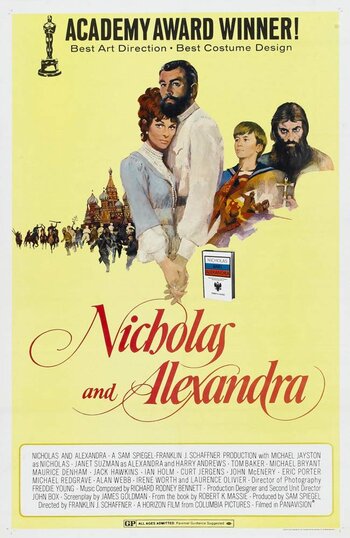 This is not going to end well.
"A strong man has no need of power, and a weak man is destroyed by it."
— Nicholas II
Advertisement:

Nicholas and Alexandra is a 1971 Epic Movie directed by Franklin J. Schaffner. Based on the nonfiction book by Robert K. Massie, it is a Biopic of the last Russian tsar, Nicholas II (Michael Jayston), and his wife Alexandra (Janet Suzman), dramatizing their lives from 1904 to 1918, as their world collapses around them, they are overthrown and are eventually murdered by the Bolsheviks. The film shows the personal side of Nicholas and Alexandra, their loving and affectionate relationships with each other and their children, while also portraying their incompetence as rulers and their many mistakes that led to their destruction. Other scenes follow Kerensky (John McEnery), who struggles to establish a democratic government in Russia following the overthrow of the Romanovs, and Lenin (Michael Bryant), who rises from obscure rabble-rouser to the first ruler of the Soviet Union.

This film is notable for an impressive All-Star Cast. Tom Baker, best known for being the most iconic incarnation of Doctor Who, has a memorable supporting role as Grigori Rasputin, which earned him a Global Globe nomination. Laurence Olivier also makes the most of limited screen time as Count Witte, Nicholas's one intelligent adviser. Michael Redgrave plays Foreign Minister Sazonov. A startlingly young Brian Cox plays Leon Trotsky, and Ian Holm plays a Red officer who takes charge of the Romanovs for a while.