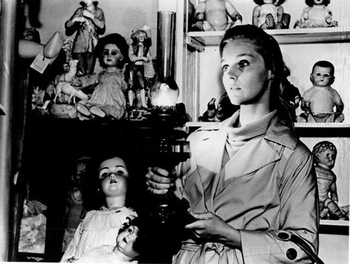 Bunny Lake Is Missing is a 1965 British Mystery Fiction/Psychological Thriller film, adapted from a 1957 novel by American writer Merriam Modell (writing as Evelyn Piper) and directed by Otto Preminger.

Young American single mother Ann Lake (Carol Lynley) has recently moved to England to live with her brother, magazine journalist Steven Lake (Keir Dullea). After dropping her four-year-old daughter Felicia, who she calls Bunny, off at a preschool, she runs off to do some errands. Ann goes back to the school to pick Bunny up, but can't find her. The busy school staff is of little help, claiming to have never seen the girl. Steven, eager to assist his sister, joins the search, but it still proves fruitless. The police are called, but Superintendent Newhouse (Laurence Olivier) suspects something amiss with the whole affair, particularly when he finds no evidence of a little girl living with Ann, and learns that Ann had an Imaginary Friend named Bunny when she was a girl.

Largely ignored on release, the film has gained a reputation as a Cult Classic. Dullea was cast in 2001: A Space Odyssey because Stanley Kubrick admired his memorable performance as Steven.