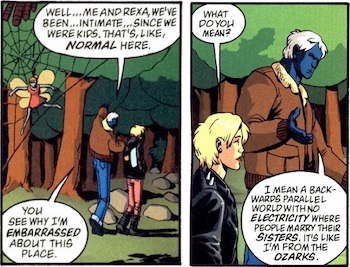 "It's impossible for me as a British citizen to go into any museum in any nation on the planet Earth without, within five minutes, starting to feel guilty."
— John Oliver
Advertisement:

The Cultural Cringe is an internalized inferiority complex that causes people in a country to dismiss their own culture as inferior to that of other countries. Such people will thus tend to discount a lot of their own culture and embrace another country's 'better' culture instead. In fact, it's common for people suffering from Cultural Cringe to disavow that their own country has a legitimate national culture at all. There are many possible reasons for this, but one is due to it being true what they say: familiarity breeds contempt. Other cultures seem so much more exotic and interesting when you don't know much about them, and don't have to actually live with their more negative aspects day in and day out.

Australian literary critic and social commentator A. A. Phillips named and codified the trope with his 1950 Meanjin essay "The Cultural Cringe", in which he observed this behavior — specifically Australian feelings of inferiority towards Britain — in rampant abundance among his contemporary fellow Australians. (This is also why it's a part of Australia's Useful Notes, along with Tall Poppy Syndrome.) This trope is at least Older Than Radio, though, enough so that among the people Gilbert and Sullivan felt "would not be missed" was:

Advertisement:
"The idiot who praises, with enthusiastic tone / All centuries but this, and every country but his own."

This isn't necessarily the opposite of Patriotic Fervor, though it may of course arise as a (possibly overcompensatory) reaction to it. Nor is it quite the same thing as Boomerang Bigotry. Someone with the Cringe may still love his/her country and national heritage despite its supposed inferiority. As one may put it, their own culture may suck, but it's still their culture.

The flip side of (and often combined with) a Foreign Culture Fetish. Compare Internalized Categorism, where the character starts hating themselves for being a part of a culture perceived by others as "bad," rather than merely seeing their culture as inferior to other cultures. See also Boomerang Bigot, where the character might feel anything from their ethnicity to their species is inferior, rather than feeling their country and its culture specifically is inferior, in comparison to another country and its culture. See also Cultural Rebel, who may or may not suffer from this trope. Compare also Cargo Cult, and My Country Tis of Thee That I Sting. Compare Stop Being Stereotypical and Cultural Personality Makeover, as something unique to a specific culture can end up being viewed as a stereotype by members of that culture. Contrast Cultural Posturing.

Changes in the Cringe

conducted by the Reputation Institute

shows how Cultural Cringe among nations has changed in recent years; it appears now that Canadians and Australians lead the pack for those who have the most Patriotic Fervor for their country, while Americans (who are traditionally mocked for having "a flag on every building") are actually in the middle of the pack, near Russia in terms of national pride. Japan, it seems, is the country that now suffers most from the Cringe. Further details on the study can be found here

It's important to note that none of the countries in that study put themselves below 50, suggesting that even with the cringe, on average most people everywhere have a respect for their country.