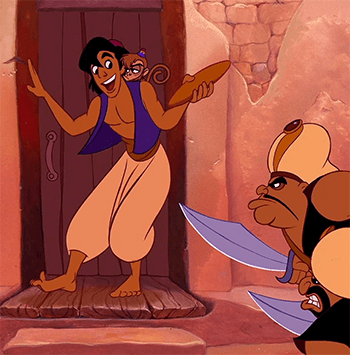 ♫ Gotta eat to live, gotta steal to eat, tell you all about it when I got the time! ♫
Kris: Hey, so you had a rough childhood...
Hari: [laughs] I had a great childhood. Where do you think I learned how to fight? By the time I was eight, I knew: Every fight is a fight to the death.
— Blade of Tyshalle
Advertisement:

The Satisfied Street Rat is a character archetype common to more cynical works that has the following characteristics:

Frequently Anti Heroes, and often Byronic Heroes who embodies on being Just a Gangster and proud. The degree to which the character is well-adjusted versus harboring a lot of pain inside depends on the writer. See also Wrong Side of the Tracks, Neighbourhood-Friendly Gangsters. As children, they are more likely to have been The Artful Dodger rather than the Street Urchin, but the Dodger is more of a trickster where the Street Rat is more of a cutthroat. May have been raised by The Fagin. Those who knew the Street Rat as a more vulnerable child may see them as a case of From Nobody to Nightmare in adulthood.