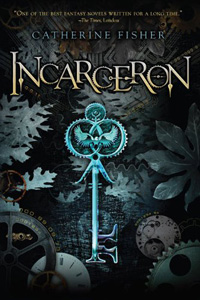 Incarceron is a Science Fiction (with the feel of, and marketed as Fantasy) duology by Catherine Fisher. It tells the story of the prison complex known as Incarceron. Incarceron is infinite, inescapable, and to top it off, it's a malevolent sentient being hell-bent on forever confining the thousands of inmates inside it. No one enters, no one escapes — except one boy. Finn is a troubled inmate with vague memories of another life outside the prison.

During a struggle within the prison, Finn finds a crystal key, which he and many others believe may be the key to Incarceron. He soon discovers that the key has another purpose; through the key, which turns out to function as a communication device, he meets a girl named Claudia. Claudia claims to live Outside Incarceron, but is doomed to an arranged marriage. With help from Claudia and from visions of the legendary Sapphique, Finn is determined to unlock the mysteries of his past and perhaps escape from Incarceron.

The sequel and conclusion, Sapphique, reveals greater problems now that Finn has Escaped and is challenged as crown prince by a remarkably similar boy.