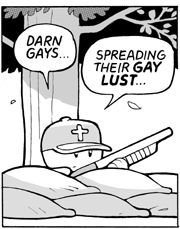 Mr. Garrison: Stanley, gay people... well, gay people are evil. Evil right down to their cold black hearts, which pump not blood like yours and mine, but rather a thick vomitous oil that oozes through their rotten veins and clots in their pea-sized brains, which becomes the cause of their Naziesque patterns of violent behaviour. Do you understand?
Stan: ...I guess.
Garrison: Good. I'm glad we could have this little talk, Stanley. Now you go outside and practice football like a good little heterosexual.
— South Park
Advertisement:

This is a character who believes that actively non-heteronormative individuals are bad or 'unnatural' and thus must be unsatisfied, incomplete, or immoral, perhaps even a danger to society. This can certainly be Truth in Television, as homophobia and queerphobia are still apparent in the world, and institutionally and even legally supported in some places. Obviously, queer people themselves can be as morally and satisfactorily ranging as heteronormative people.

The depiction of the character can go from being misunderstanding and delivering unwelcome advice all the way up to the extremes of bigotry or even physical violence in their efforts to 'help' or convert people who engage in homosexual activities. They can be diverse: anything from specialized Moral Guardians or Principles Zealots to a bloodthirsty mob equipped with Torches and Pitchforks. Sometimes it involves characters making efforts to recruit others to their cause. While not all examples are religiously motivated, or Christian if they are, in Western contexts at least they are more likely than not to be Holier Than Thou. A common twist is for this character to be Armoured Closet Gay.

A common tool they might use for their cause is a kind of pity, ostensible or even sincere, trying to impose a negative self-image on the non-normative characters or trying to explain it as caused by a meaningless childhood 'sin' like being given the 'wrong' toys. Alternatively, the argued (or even actual, as given by the story) cause of a character's queerness may be explained as a dramatic sexual experience such as rape, often in conjunction with the idea of them, therefore, being broken and needing to be 'fixed', possibly in the same manner. Thus, a non-violent or even non-hostile Crusader might still be a source of Gayngst for the sexual minority person.

When the queer character responds to insults or other criticism against their sexuality by talking about their love for a partner, it usually is part of An Aesop where the Heteronormative Crusader is portrayed as the Noble Bigot who then learns to be more tolerant and gains an understanding of the queer character (the same can also happen for bisexual or celibate characters, for example, the priest talking about the role of faith in his life). After a person responds to criticism by talking about their love of their significant other it can also become a Kick the Dog situation if the Heteronormative Crusader continues with insults. Alternatively, he might respond with personal sympathy while nevertheless upholding his own ideals; this would be the preferred option for an example who is also some sort of Principles Zealot or Knight Templar.

The trope can be Played With, for example in situations when a gay character is created only to be a one-dimensional walking Aesop about the importance of tolerance and diversity. It can be subverted when the character thought to be a Heteronormative Crusader's actions are Bait-and-Switch, for example, the parent who disapproves strongly of their child's gay relationship but instead because they're concerned about the partner's criminal record, not gender.

Heroic examples are common in older works, going all the way back to The Bible and beyond, but less so more recently, at least in the Western world, due to changing societal perceptions of sexual diversity and religious tolerance in many cultures. In mainstream modern Western fiction, these characters are nowadays more often being played for laughs, or else as a way of highlighting how unsympathetic the antagonist is, or even have this characteristic tacked on a character via Compressed Vice for the sake of An Aesop, for and such sympathetic examples as occur will most likely be a source of Values Dissonance to many audiences. Still, there may be a story where the Heteronormative Crusader might be the hero, especially if the gays are the villains. Again, such scenarios would stray into Unfortunate Implications territory, and likely deliberately.

While people who campaign against homosexuality (or on a lower level, are simply personally opposed to it) are certainly Truth in Television, this trope is concerned with the fictional use of such characters, usually as a stereotype or plot device, and frequently with traits of a Strawman Political. As with other politically charged topics, classing real people as such would inevitably invite controversy and hostility. Therefore, No Real Life Examples, Please!