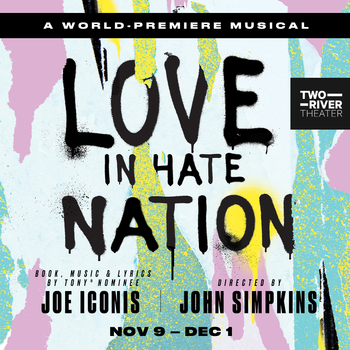 "Revolution in the institution!"
Advertisement:

Love In Hate Nation is an original musical written by Joe Iconis of Be More Chill fame. It premiered at the Two River Theatre in Red Bank, New Jersey in November 2019. Set in The '60s, it tells the story of sixteen-year-old Susannah Son, a Black aspiring musician who is sent to a girl's juvenile hall following a suicide attempt. Run by the tyrannical Miss Asp, National Reformatory for Girls, or "Nation" for short, is a decrepit and oppressive institution where Susannah encounters all kinds of misfits — including their leader, resident bad-girl Sheila Nail. Romances blossom, fights break out, and revolutions are born, all set to some catchy vintage tunes.