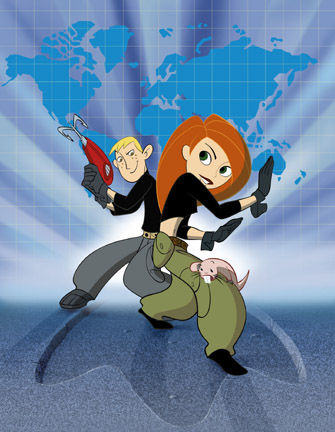 Ron, stop checking out Kim and focus!
"Oh, oops, I forgot to leave some for Kenichi again."
— Miu (after beating up all the bad guys herself... again), Kenichi: The Mightiest Disciple
Advertisement:

It starts with an ordinary guy living an ordinary life... until he meets a woman who changes his life forever. Unlike a typical Magical Girlfriend, the series is more about her kicking butt and taking names than causing hilarity to ensue. The story might be told through the guy's eyes, but as often as not she's the real star.

Fortunately for the guy, this doesn't mean she's completely out of his league. In fact, meeting her usually means the Ordinary High-School Student isn't so ordinary himself. That first fateful encounter will probably end up granting him special powers, or unlocking powers he didn't know he had. Maybe he did know, but didn't have a reason to use them.

In shows where Anyone Can Die, an Action Girlfriend has much higher chances of survival than most other love interests, since she is rarely subject to Cartwright Curse. In this case, they might become a Battle Couple and the guy to be an Amazon Chaser.

She's likely to become an Action Mom, if she and her boyfriend marry and have kids, or if she becomes a parental surrogate. Contrast: No Guy Wants an Amazon. Compare with Violently Protective Girlfriend.