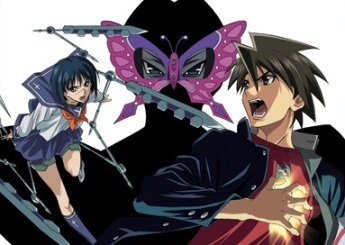 "A choice isn't something someone gives you, it's something you make for yourself."
— Papillon
Advertisement:

Buso Renkin (literally Arms Alchemy) follows Hero and Ordinary High-School Student Kazuki Muto, who is killed one night trying to protect a mysterious girl from a monster. However, to his surprise, he wakes up the next day, seemingly good as new. Turns out it wasn't a dream either when the girl, Tokiko Tsumura, shows up again, informing him that she felt responsible for his death and resurrected him with the power of Alchemy. From here on Kazuki discovers his own powers and, together with Tokiko, journeys into the world of Alchemists and their individual Renkin as they fight the monsters known as Homunculi. No, not the Fullmetal Alchemist kind, though there is definite overlap between the series theme-wise.

A ten-volume manga by Nobuhiro Watsuki, the creator of Rurouni Kenshin, it was later adapted into an anime and a light novel. The original manga was serialized from June 2003 to April 2005 in Weekly Shonen Jump before being cancelled. Interestingly however, the manga actually managed to have a true ending and somehow actually increased in popularity after completing its run, to the point where it got both said anime and light novel at least a year or 2 after it's completion. The English translation is published under the young adult Shonen Jump Advanced label.