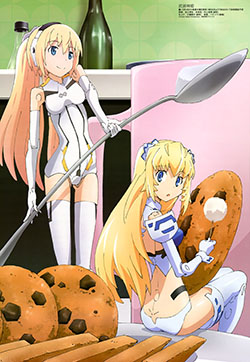 The Busou Shinki TV series is a 12-Episode Anime based on the toyline of the same name, which aired from October to December 2012. There was also a thirteenth episode released as an OVA that revealed some more backstory.

Ann, Ines, and Lene are Busou Shinki, a kind of small, doll-sized Robot Girl, and they live peacefully with their Master in a small apartment that they have recently returned to from overseas. This anime follows the adventures that fill their lives after the Strarf-type Hina joins them.

Compare Hand Maid May, where the title robot girl maid is decidedly a non-combat model unlike the Shinki; Ichigeki Sacchu!! Hoihoi-san, where Hoihoi-san is another 1:1 scale robot doll that battles cockroaches immune to common pesticides; Angelic Layer, where the little fighting robot girls are not the focus, but their Masters are instead; and Spiritual Successor Frame Arms Girls, which started a few years later and features a female Ordinary High-School Student as the toys' owner.