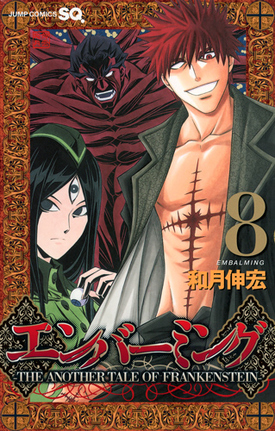 A manga by Nobuhiro Watsuki, Embalming is set in a turn-of-the-century Europe where a number of people are using the notes left behind by one Dr. Victor Frankenstein to do their own crazy monster-building experiments. The resulting creatures, called Frankensteins, come in all sorts of sizes, shapes and mental states: from grotesquely monstrous to seemingly human, and from slightly nuts to batshit insane.

Instead of one main character, Embalming features an ensemble cast: revenge-driven Fury Flatliner, who wants to destroy all Frankensteins; happy but dumb Frankenstein girl Elm and her misanthropic human companion Ashuhit Richter, who belong to a secret society dedicated to Frankenstein research; John Doe, a mysterious and dangerous Frankenstein, and others.

The full title is Embalming - The Another Tale of Frankenstein, but that's both too long and too Engrish to be used in real life. The manga ran in Jump Square from 2007 to 2015, though it was placed on hiatus in March 2012 until the fall, while Watsuki worked on a limited run reboot of Rurouni Kenshin. The series is based on a one-shot story Watsuki wrote in 2006 that appeared in the final tankoubon of Buso Renkin.