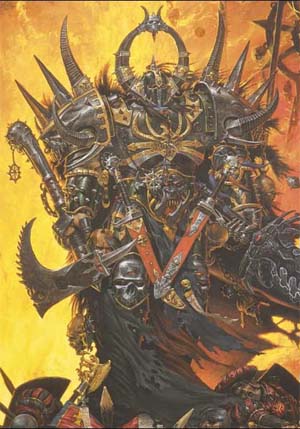 An evil character, particularly his armor, will be covered in a mass of spikes, blades, horns, and spines that would make a porcupine jealous. Also, expect black or blood-red armor.

The idea is to make sure the audience knows that this person or group is dangerous. Others might think it just looks cool. Such spikes or blades are often purely ornamental: despite the fact that they're sharp enough to pierce flesh, it's pretty rare for Spikes Of Villainy to be actually used in combat. Indeed, you would have to get to very close quarters in order to stick an opponent using spikes on your armor—meaning it probably would have been easier to stab them with a hand weapon—and their tendency to accidentally snag on things or poke allies next to you would be a nuisance, which is why in real life they were mostly confined to helmets and rarely used offensively. An exception to the ornamental rule is if spikes are found on a video game enemy, in which case they stand a very good chance of foiling would-be Goomba Stompers.

Samurai are a potential exception whose spikes are not necessarily villainous. Historically, they did wear headgear impressively decorated with horns, spikes, and rings; modern depictions of samurai tend to be both heroic and spikey.

A subtrope of Dress-Coded for Your Convenience and Evil Is Angular. May be complemented with Chained by Fashion, Fangs Are Evil, Flying Cutlery Spaceship, armor-mounted Femme Fatalons, or Ominous Opera Cape. Most likely used by a Tin Tyrant. See also Scary Impractical Armor. Not to be confused with Spikes of Doom. Sister Trope to Horns of Villainy; the two don't necessarily have to coincide. Savage Spiked Weapons, while not exclusively "evil", could be considered a weapon related cousin of this trope.

Even better, the armor itself is cursed and turned her evil when she put it on.

Even better, the armor itself is cursed and turned her evil when she put it on.