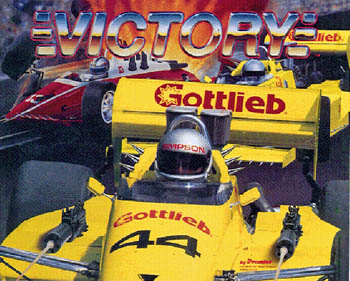 Car Wars: The Pinball ...not.
"Get out of my way!"
Advertisement:

Victory is an arcade pinball game designed by John Trudeau with art by Constantino Mitchell. It was released by Gottlieb (under the "Premier" label) in 1987.

The game is, quite simply, a fictionalized auto race in pinball form. Shoot the various ramps and chutes up, around, and under the playfield to reach the seven checkpoints along the track, then cross the finish line and win the race. Faster track times lead to higher scores, though savvy racers will be sure to make a pit stop in the upper playfield for extra balls, and spell FINISH to boost the multiplier.

Victory is considered to be a solid but generic design with a strong emphasis on good aim; the stop-and-go flow and linear gameplay tends to turn off casual players, although experts can leverage the multiplier and checkpoint countdowns for higher scores. It was originally designed to have a third, lower-level playfield, but it was removed due to cost.

Victory was also one of the few Gottlieb games to use a "Vitrigraph" mylar overlay on its playfield; unfortunately, it had a tendency to come loose over time, making the game unplayable. Gottlieb responded by offering replacements using conventional wood silkscreening with a mylar cover.

Digital versions of this game are available for Pinball Hall of Fame: The Gottlieb Collection and The Pinball Arcade.