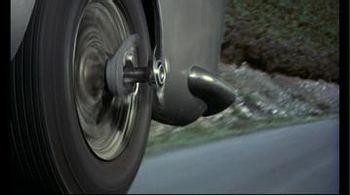 Real sharp rims you've got there.
You're catching up the other guy's vehicle with your Cool Car, but he won't let that happen since he's a Mook or doesn't want to lose the Wacky Race. So, he's going to smash his car against yours. Not content with simply trying to run you off the road or shove you off the cliff face, he's going for maximum damage. He's placed spikes on his wheels that now act as a cross between a drill and a chainsaw, and will tear your unprotected tires to shreds on contact. A must have for Roman chariots.
Advertisement:

Commonly called Boudica spikes (at least in the UK) after the chariots of the "Queen" that fought against the occupying Romans in England around 60AD, although there's no evidence that her chariots were ever used in battle.

The Other Wiki's article on this here.