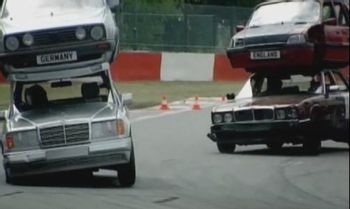 In Real Life, the racing of any kind of vehicle is very dangerous, and many people have died or suffered serious injury while doing so. Things have gotten better, but it is still a potentially deadly sport truly only kept in the reins of safety by the skill of the drivers. However, there is also the fact that in real life, except for off-road rallies and endurance races, most races simply involve going from point A to point B, or driving in a circle for 500 or so laps. Because of this, writers tend to spice things up a bit. The result is a Wacky Race, a race so improbable, so outrageous, so dangerous, that it makes Pikes Peak

The race often has rules more akin to a Demolition Derby than a normal race, and often takes place on an improbable course. Courses built around entire cities, courses with rollercoaster-like architecture, courses floating in midair, courses existing only in an alternate racing dimension, and courses in locations where it's generally not safe to be standing, let alone racing, are common. In addition, the vehicles themselves are often specialized. If they're cars, expect them to have weapons and other modifications.

If they're go-karts, expect a lot of Power Ups to be littering the course—if not, plain old Car Fu will be highly encouraged. And if they aren't normal vehicles, expect them to be some amazing sci-fi vehicle capable of pretty much defying the laws of physics. The Vehicles are often themed after their drivers (who are just as wacky as the race itself). The Rules of the Road may be altered arbitrarily. And of course, expect the prize to be some sort of MacGuffin.

It's almost traditional for a set of characters in a non-racing series to have an episode or spinoff where they engage in this. The hero usually wins, (or a random side character) the Ensemble Dark Horse always gets the coolest car, and the villain cheats and has it backfire hilariously. And, of course, someone always Drives Like Crazy.

Most Mascot Racer games involve this.