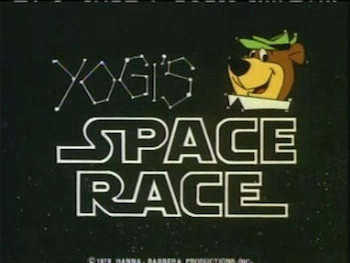 Yogi's Space Race was a Saturday Morning Cartoon produced in 1978 by Hanna-Barbera for NBC. It was essentially an update of the same studio's Wacky Races, with Yogi Bear, Huckleberry Hound and Jabberjaw among the competitors.
Advertisement:

The show had three supporting segments: Galaxy Goof-Ups, The Buford Files and The Galloping Ghost. The latter two were later combined into one half-hour show.