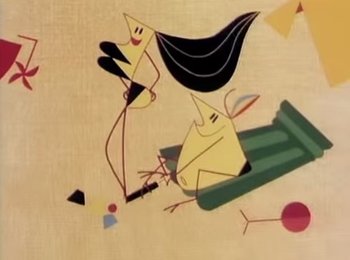 Ersatz (1961), aka Surogat, aka The Substitute, is an animated short film from the former Yugoslavia, directed by Dušan Vukotić.

A pot-bellied man arrives at the beach for a day of leisure. He whips out a series of geometric shapes, and, using an airpump, blows them up into various objects, including things like a table, a tent, a grill, and a fish to catch. Things get weirder when he apparently decides he wants companionship, and blows up one of his balloons into a woman.

Ersatz was the first non-American cartoon to win the Academy Award for Best Animated Short Film.