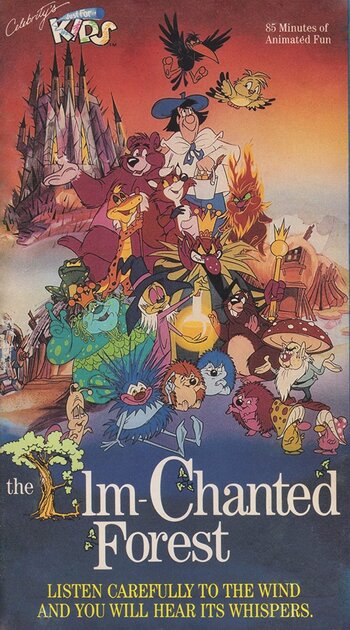 The Elm-Chanted Forest is a Yugoslavian/U.S. joint-produced animated film from the 1980s. In fact, it was the first feature-length animated film produced in what is now Croatia. And it proves that the Croatians can weird it up with the best of them. It is also known as Fantasy Forest, but the pun is more distinctive.

The enchanted forest is protected at all times by the great and mighty enchanted elm tree that watches over it. But the nefarious Emperor Spine, the King Cactus, watches it from afar, and he wants to turn it into a desert land that he can rule. As it happens, an exceedingly mild-mannered painter named Peter wanders into the forest from a nearby village to paint the elm tree. When he falls asleep under it, the elm tree grants him a passel of magical powers with which to protect the forest: the ability to talk to animals and a magical paintbrush. At first Peter is content to simply hang out with the local wildlife, but soon the Cactus King bears down on him and his friends. (The bear almost does, but he's more of a good guy.) Soon Peter is teaming up with animals, spirits, and even a beleaguered wizard named Thistle to stop the Cactus King, enchanted upheaval and... literally magic mushrooms!? Hey. we warned you it was weird!

It managed to spawn a sequel, The Magic Hat, but that one never really made it overseas. It starred Thistle the wizard.