If I Can't Have You 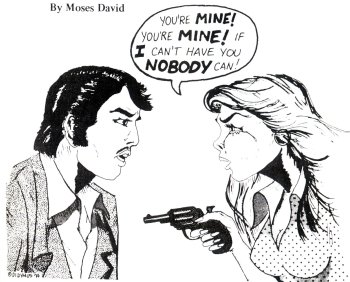 "But if I wasn't ever going to be happy again, then I would make sure that they wouldn't be alive to enjoy their happiness."
— Hikaru, Revenge Road
Advertisement:

A Stock Phrase often spoken by jealous and envious or narcissistic characters (often villains) demanding to be loved. The set up is usually as follows: Baddie has grown infatuated with the hero or his Love Interest and kidnaps her with the intent to "marry" her. Or just have his way with her. While it is possible for the villain to love their captive in a non-sicko way, it's usually love of the Love Makes You Evil or Love Hungry variety. Case in point: once the hero breaks her out and they kiss passionately, expect the villain to shout this line and decide that if she won't love him, she's not going to love anyone period, usually before trying to murder her or get rid of her in some other despicable fashion.

If the villain is a Femme Fatale who was wooing the hero, she may well shoot him once his love interest shows up. Many a non-villainous "jilted" Clingy Jealous Girl will react this way, and there may be some truth to it, as this seems to be the mentality behind many people who kill their cheating spouses or ex-lovers (both in fiction and in Real Life). A woman may also be more likely to get away with it.

If the villain ever had an inkling of a chance, this becomes a form of Kick the Dog or Moral Event Horizon that shows that they're "The Wrong Guy".

See No MacGuffin, No Winner when the trope phrase is directed at something of intrinsic value, rather than an object of affection. See also Love Makes You Evil, Yandere, and Living Emotional Crutch. The polar opposite of I Want My Beloved to Be Happy. Often the person trying to kill the object of their affection is Not Good with Rejection. And if that person is a villain, you can bet they will have suffered a Villainous Breakdown.

An alternative to killing their beloved is for the villain to kill the hero for being a romantic rival. If the villain is canny, he'll play it off as an accident. If he isn't quite sane, he'll tell his captive and actually expect this to make her throw herself in his arms. When this trope is magnified and taken to its logical extreme, it becomes either Taking You with Me or Put Them All Out of My Misery.

As this trope frequently occurs during the climax of a story, beware the spoilers!