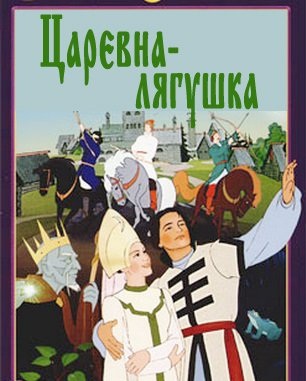 Young and beautiful princess Vasilisa catches the eye of Evil Sorcerer Koshchei, who wants to marry her. Vasilisa laughs at his proposition, which prompts him to curse her: she is turned into a frog for three years and three days.

Sometime later, an old king sets his three sons to marry and tests their chosen brides. The king tells them to shoot arrows and find their brides where the arrows land and the youngest prince's arrow is picked up by Vasilisa (in her frog form). The king assigns his three prospective daughters-in-law various tasks, such as spinning cloth and baking bread. In every task, the princess-turned-frog far outdoes the lazy brides-to-be of the older brothers, as she can regain her human form during the night and use magic. Still, Ivan, the youngest prince, is ashamed of his froggy bride, until he realizes who she really is.

Try not to confuse this with The Princess and the Frog.

The Frog Princess provides examples of: