Fanfic / Shards of a Memory 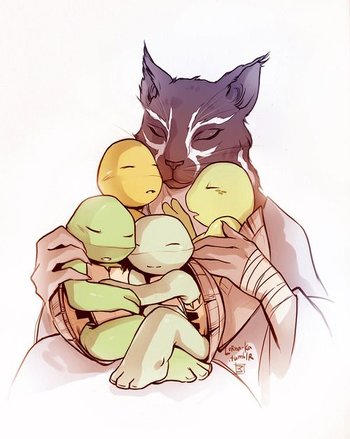 It was then that she took the name "Shard", viewing the mutation as the shattering of the last of her dreams, and she was now only the shard of a memory. Out of a last remaining sense of honour, she could not leave the turtles to die, but her life was a fog of misery until, one day, as she lay shivering in a damp sewer tunnel, one of the turtles approached her and laid its little hand on her cheek.
Advertisement:
Then, it opened its mouth, and spoke. "Kaa-san."
Shard named that one Leonardo.
It was then that she realized that the mutation was not an end, but merely the beginning of a new dream. She gathered her babies to her, and made a new home for them in an abandoned subway station, training them in the art of ninjutsu so that they could defend themselves if the world ever turned against them.
And though life was hard sometimes, and they had little, their home was a place of laughter, and love, and joy.
— Chapter 1

What if it had been Hamato Yoshi who died in the fire, and Tang Shen who moved to New York, bought the turtles, and encountered the Kraang in the alley on that fateful day?

, a series of ficlets and drabbles based on the AU idea that the turtles were raised by a mother, Master Shard.

The fanfic can be read on Archive of Our Own here

Shards of a Memory provides examples of: