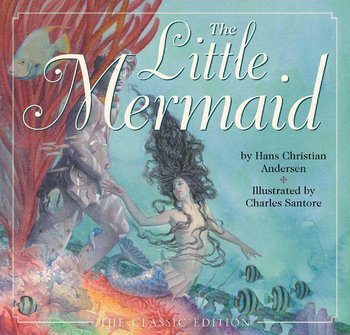 Published in 1837, The Little Mermaid is a classic Fairy Tale written by Hans Christian Andersen, about a mermaid who seeks to become human.

Merfolk live for centuries but have no afterlife. One of them, a princess, is deeply curious about the world above but isn't permitted to go to the surface until she turns fifteen. She is the youngest of her sisters, and when each of them comes of age, she returns with stories about the wonderful sights to be seen up there. When her turn finally comes, the youngest mermaid rescues a young prince from drowning. She leaves him unconscious on shore, near a temple where he can be found, but she has already fallen in love with him.

Unable to enjoy life below the waves, the mermaid makes a deal with the Sea Witch to become human. The cost is steep: the Sea Witch can grant her legs and inhuman grace, but every step will feel like she is walking on knives. The mermaid must also give her voice as payment. And her humanity is only conditional: if she can make the prince fall in love with her and marry her, she can gain a share in his soul and be truly human, but if he marries another, she will die at the next sunrise.

The prince she loves finds her and takes her in. She becomes his favorite companion, accompanying him on many of his outings and dancing beautifully for him despite the excruciating pain in her feet. But he does not truly love her: he has lost his heart to a temple maiden who (as he believes) once saved him from drowning.

Then he is betrothed and sent unwillingly off on a ship to meet his intended bride. Lo and behold, she is the temple maiden! The prince is overjoyed, but the mermaid silently mourns. The wedding takes place on the return voyage, with the mermaid thinking of nothing but her impending death. But that night, her sisters appear to her with a dearly-bought Last-Second Chance — if she kills the prince with the enchanted knife they have brought her, she can become a mermaid again and live out her centuries under the sea. The little mermaid considers it, but ultimately she is unable to murder the man she still loves. She throws the knife away and jumps from the ship, dissolving into sea foam.

Unexpectedly, the mermaid finds herself rising from the water in the company of the Daughters of the Air, benevolent spirits who, after 300 years of good deeds, will earn an immortal soul and go to Heaven. Whenever they see good and obedient children, their sentence is shortened, but disobedient ones make it longer.

The story has been adapted several times, from ballets, to musicals, to the 1989 Disney animated musical. The film changed the ending to a Happily Ever After one, and several subsequent adaptations have followed suit.

It can be read online here