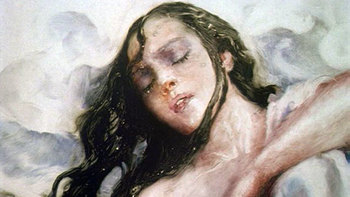 Mermaid, aka Rusalka (Русалка) is a 1996 animated short film (ten minutes) from Russia, by Aleksandr Petrov.

The short appears to be set in 19th century Russia, centering on two Orthodox monks—a white-haired old monk and his young apprentice—living in an isolated cabin. One day the young monk goes to the ice-choked river for water and sees a young woman caught in the current, apparently drowning. He manages to grab her and fish her out, but after he races to the cabin for a sled and blankets and returns, she is gone, the footprints in the snow leading back to the river.

However, that isn't the last that the apprentice sees of the woman. He later sees her frolicking in the water like she was born to it, swimming like a dolphin, casually flipping him fish. The apprentice becomes enthralled with her beauty and her angelic singing voice, and keeps returning to the river to find her.

The old monk hears the woman's laughter as she frolics with the apprentice by the river and realizes just who, or rather what, she is: a "rusalka

", the Russian equivalent of a mermaid. Unlike Western mermaids, the rusalka has a fully human body. Also unlike Western mermaids, who are usually friendly and sweet like Ariel, the rusalka are actually sirens, who lure young men to their death by drowning. The old monk is doubly horrified because, while he realizes what the woman is, he also knows who she used to be, and why she is in the river.

Done with the distinctive paint-on-glass style that Alexsandr Petrov uses for all his shorts.