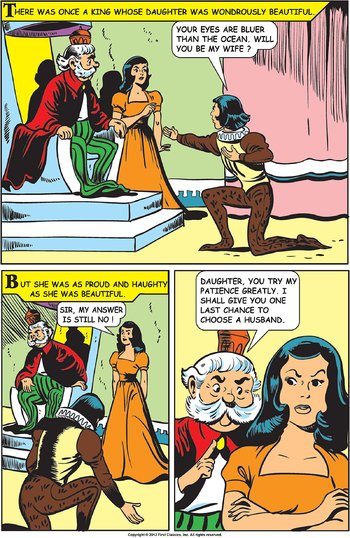 "No, father; you may cut off my head, if you choose, but marry that horrible beggar—I never will!"
— Don Giovanni de la Fortuna
Advertisement:

An Arranged Marriage is set up for a young person (usually a daughter) by her parents, but the child refuses to go through with it. Her refusal may be eventually accepted, with or without a lot of conflict and drama, so that she is free to remain single or marry her true love. Or, she may suffer Honor-Related Abuse, depending on just where on the Sliding Scale of Idealism Versus Cynicism the show is.

In older tales, a group of sisters may be offered the bridegroom; only the youngest is willing to consent. She invariably ends up with a fine bridegroom.

The child may be adult or underage; the trope covers the entire spectrum from the nicest forms of Arranged Marriage to Old Man Marrying a Child.

Contrast Parental Marriage Veto. For works where the child wishes she had refused the marriage, see Marital Rape License.