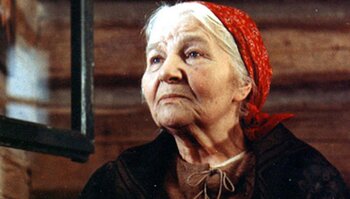 The Grandmother as portrayed in the 1971 TV movie
The Grandmother - Scenes from Country Life (Babička - Obrazy venkovského života) is a novel by the Czech writer Božena Němcová, considered a classic of Czech literature, published in 1855 as a tribute to the author's own grandmother.
Advertisement:

The eponymous grandmother, an old peasant woman, lives in a cottage in North-Eastern Bohemia (then under Austrian rule). One day, one of her three children, her daughter Terezie, writes her a letter in which she states that her husband has just received a position as the coachman of a Princess,note That is, a high-ranking noblewoman who spends part of the year on her estate, which is located only a few miles away from where the Grandmother lives. She asks the Grandmother to come and live with her family, adding that her grandchildren, whom she has never met, are looking forward to seeing her. The Grandmother is used to her life in the village and is not sure if she should take her daughter up on her offer, but, blood being thicker than water, she finally decides to go. The milieu to which she arrives is a welcoming one. Her daughter's family, the Prošeks, have been allotted a lovely cottage called "Staré bělidlo" on the estate. Everyone is excited to see the Grandmother, and while the children are at first surprised by her appearance, which is different from that of other grandmothers they know, they soon develop a strong mutual bond due to the grandmother's immense kindness. It is not long before the Grandmother takes on a significant role in the upbringing of the three children, developing a particularly strong bond with the girl, Barunka. She also takes over much of the running of the household, as her daughter is also employed by the Princess at her chateau. Although some of the old lady's country ways appear old-fashioned at first, she will change nothing about them and continues to do things her way. The Grandmother is portrayed as a paragon of kindness, wisdom and piety, as well a loyal Czech woman. She teaches the children good morals, takes them to see various locals, is befriended by the Princess, gives advice to various members of the community, and intercedes for young people who face obstacles to getting married to those they love. In this way, she gains the universal love, respect and admiration of her family and the community at large.

A lot of the plot is episodic, describing the lives of people from the Czech countryside and with several story lines tied together.

This novel has long been considered one of the most iconic in Czech literature. It must be said, though, that while the book still stands as an official classic, it is perhaps no longer read as widely for pleasure as its status would demand. The Czechs are are not a people known for excessive sentimentality and they tend to find more relevance in more modern titles, such as books by Karel Čapek. Nonetheless, the book has significant value as an ethnographic document, as it describes various Czech folk customs. Furthermore, if one looks past the book's romanticism, one finds interesting stories of a variety of female characters of various social backgrounds who, while they keep to their stations in life, are often shown exercising agency in various ways. The novel would deserve a proper feminist analysis.