Literature / Beauty and the Beast 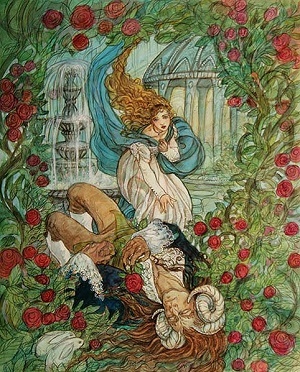 Beauty and the Beast

is an old French Fairy Tale that was, at the time, basically propaganda for Arranged Marriage using Rags to Royalty. Over time it has lost that meaning and become more romanticized. The original literary version of the story was written in 1740 by Gabrielle-Suzanne de Villeneuve, and was a sprawling and convoluted affair of contrived coincidences and last-minute exposition, in which the Beast and Beauty were revealed to be first cousins, and Beauty is half-fairy (on her mothers' side), and royalty (on her fathers' side). In 1756, Jeanne-Marie Leprince de Beaumont condensed it to the version which is best known today (excepting Disney's). While using tropes found in older folk fairy tales, de Villeneuve's version is the first to use the title "Beauty and the Beast", and the psychological plot — revolving around Beauty's mental conflict — is not found in folk tales prior to this one.

In Leprince de Beaumont's version, Beauty is the daughter of a rich merchant who is suddenly plunged into poverty. When one of his ships comes in unexpectedly, the merchant asks his three daughters what they would like him to bring them for presents. The two eldest ask for jewelry and dresses, but Beauty only wants a rose.

The ship turns out not to be profitable, and the merchant turns back, empty-handed. There is a winter storm, and he takes shelter in a mysterious but hospitable castle, where, finding a magically summer garden, he picks a rose for his daughter. Immediately, a monstrous beast appears and threatens his life. The merchant pleads on his daughters' behalf, and the Beast allows the merchant to go home to say goodbye to his daughters, or persuade one of them to come in his place.

The daughters succeed in learning the father's adventures, and Beauty insists on going in his place. She soon finds that the Beast is gentle and polite, in spite of his appearance, and that he wishes her to marry him. She refuses to do so, although she grows increasingly fond of him. One day, on learning that her father is ill, she asks the Beast to let her go home and visit her family. He does so, reluctantly, asking her to come back within a week.

Once she is home, her jealous sisters conspire to keep her longer, in the hopes of making the Beast angry with her. Their ploy succeeds, and Beauty remains at home until she has a dream of the dying Beast. Returning to the castle, she finds him in the garden, having lost his will to live. She tearfully agrees to marry him, which breaks the curse that had made him ugly. He is magically restored into a handsome prince. Beauty's sisters are turned into statues for their evil deeds, while Beauty and the former Beast live happily ever after.

It is Aarne-Thompson type 425C, which has a good number of variants (some found here

), but is less common than tales of 425A, such as "East of the Sun and West of the Moon". The counterpart in the Grimm collection is "The Singing Springing Lark". Also compare "The Feather of Finist the Falcon".

The tale has been widely adapted in many media as a Twice-Told Tale. These include:

Obviously, the Trope Namer and Trope Maker for Beast and Beauty and Beauty to Beast. Probably more significant in terms of trope theory for giving us True Beauty Is on the Inside, which is one of the more common Aesops.

Alternative Title(s): The Beauty And The Beast