Literature / The Feather of Finist the Falcon 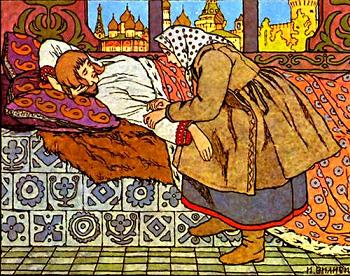 She tries to wake him.
"My beautiful dearest," he cried, "hast thou ceased so soon to love me? Never shalt thou see me again unless thou searchest through three times nine countries, to the thirtieth Tsardom, and thou shalt first wear through three pairs of iron shoes, and break in pieces three iron staves, and gnaw away three holy church-loaves of stone. Only then shalt thou find thy lover, Finist the Falcon!"
Advertisement:

A merchant who regularly went to the fair asked his daughters what they wanted him to bring back. The older two, plain, hard-hearted, and vain, asked for rich gifts; the beautiful, kind-hearted youngest asked only for a red flower to put in her window. Twice he bought the expensive gifts but forgot about the flower; the third time he remembered but could not find one anywhere in the fair. As he rode home, he met an old man who had one which was being held for the future bride of his son, Finist the Falcon. The merchant got it only on condition that she marry his son.

When the daughter heard the story, she agreed to marry Finist if he wooed her. That night, a falcon flew into her room and transformed into a handsome prince. He gave her a feather, which would conjure what she wished. The next day, as her sisters went to Mass in their finery, she waited until they were gone and then summoned a splendid coach and fine attire for herself. Even her own family failed to recognize her, but when she returned home early and sent away her treasures, she forgot to remove a diamond ornament from her hair. Her envious sisters told her father she must have taken a secret lover. When he did not listen, they gave their sister a sleeping potion and put knives in the window so that the falcon was badly injured and pronounced the curse in the page quote.

The next morning, she saw the blood and remembered hearing the words in her sleep. She had the shoes, staves, and bread made and set out to search for him. Along the way she encountered three elderly relatives of Finist, who told her he was due to marry and gave her a magical trinket to offer as a wedding gift.

When she reached the Tsardom of Finist's new bride, she found a servant failing to wash the blood out of Finist's shirt. Her own tears of sorrow washed it clean, which attracted the attention of the bride. The daughter was able to get employment in the kitchen, but even then she could not catch Finist's eye. The bride, who was greedy and somewhat cruel, offered to trade her three nights to sit up with him, each bought with one of the three trinkets. The daughter wept and begged over Finist's bedside, but the bribe had put an enchanted pin in Finist's hair so he would not wake. On the third night, despairing, she leaned over to kiss him, removing the pin for fear it might hurt him; he woke and was joyfully reunited with his beloved.

It is Aarne–Thompson type 432, the prince as bird. Compare East of the Sun, West of the Moon, Pintosmalto, Soria Moria Castle, and The Blue Mountains — and the opening of Beauty and the Beast. Josepha Sherman retold it as The Shining Falcon.

The Feather of Finist the Falcon provides examples of the following tropes: