Literature / The Fire-Bird, the Horse of Power, and the Princess Vasilissa 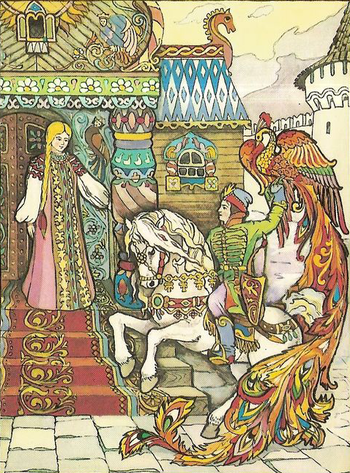 The Fire-Bird, the Horse of Power, and the Princess Vasilissa is a Russian Fairy Tale collected by Alexander Afanasyev in Narodnye russkie skazki.

A Tsar had an archer serving him who had a horse of power. One day, as he rode in the forest, he saw a marvelous feather which he knew must have been shed by the legendary Firebird. The horse warned him not to pick it up, but he did anyway, figuring the tsar would reward him. But the tsar demanded that he bring back the whole bird or lose his head.

Terrified, he asked the horse what to do, and on its advice, he requested that a hundred sacks of maize be spread over fields at night. At dawn, the firebird arrived, and the archer captured it with the aid of his horse. But no sooner had he returned with his prize than the tsar sent him on another quest: to go to the very edge of the world and bring back Princess Vasilissa for his bride. At the horse's advice, the archer asked for a silver tent with a golden roof, and victuals for the journey. He rode to her land, set up the tent, and spread out the food. Curious, the princess approached, and the archer invited her to eat and drink. She drank and fell asleep, and he put her on the horse and rode back.

Vasilissa, finding that she had been carried off to be the bride of the old and greedy tsar, refused to marry him without her wedding dress, which was still in her own country and hidden under the sea besides. The tsar again dispatched the archer, who rode his magical horse back to the edge of the world. On the shore, the horse waited until it could get between an enormous lobster and the sea; then it set its foot on its tail and did not let it go until it agreed to bring up the wedding dress.

When he returned with the dress, Vasilissa still would not wed until the archer had been boiled alive as punishment for abducting her. Terrified, he asked to see his horse one last time, but the horse seemed pleased with how things were going and advised him to submit. The princess waved her hand over the boiling cauldron, and the archer immediately plunged in and came out unharmed and even handsomer than before. Seeing this, the tsar jumped in as well, but he boiled to death. The archer became tsar in his place, married Princess Vasilissa and had a fine stable built for the horse, for he had learned the lesson of gratitude.

. Compare "Tsarevitch Ivan, the Fire Bird and the Gray Wolf".