Literature / The Fair One with Golden Locks 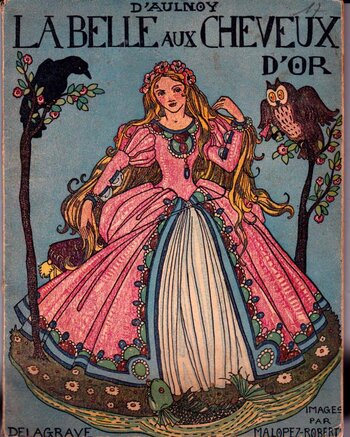 "The Fair One with Golden Locks" is a Fairy Tale by Madame d'Aulnoy. Dinah M. Mulock Craik translated it under this title; so did Andrew Lang, under the title "Pretty Goldilocks."

The tale follows the story of the beautiful daughter of a king, whom they called The Fair One with Golden Locks. A nearby prince soon heard of this beauty and began a series of attempts to woo her, eventually sending his faithful servant Avenant who brought along his dog. In his journey to the kingdom, Avenant saved many creatures, which promised to later aid him if they could. Arriving at the kingdom of the woman, he asked for her hand for his master. She agreed but asked him to complete a series of nigh impossible tasks.

Avenant managed to complete the challenges with the aid of those he had helped before. Upon returning the princess agreed to go with him and, although she had fallen in love with Avenant, he rebuked the idea, being loyal to his king. Though the king married the princess he soon became jealous of her attachment to Avenant, and sealed him away in a tower. He then decided to use a vial of water that made those washed in it beautiful to better woo his bride. Unfortunately, a maid had broken the vial and replaced it with a vial of poison, which caused the king's death. With the death of the king, the widowed queen freed Avenant, asking him to be king in his master's place, and he agreed.