Literature / Tsarevitch Ivan, the Fire Bird and the Gray Wolf 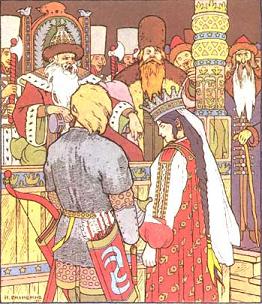 Ivan and Helena the Beautiful
Advertisement:

Tsarevitch Ivan, the Fire Bird and the Gray Wolf is a Russian Fairy Tale collected by Alexander Afanasyev in Narodnye russkie skazki.

A tsar hears that his precious fruits are being stolen nightly by a Firebird, and tells his sons whomever brings him the bird will be his heir. Only the youngest, given his turn to stand watch, remains awake and manages to drive off the bird and win a feather from it.

The older brothers set out to retrieve it, find a stone warning of the perils ahead, and decide to stay where they are. Ivan follows them and chooses a path. On it, a wolf eats his horse and offers him aid. It gives him directions on how to steal the Firebird, but he disobeys and is captured, and sent off to steal a magic flying horse for the tsar he tried to rob. The wolf gives him directions on how to get the horse, but he disobeys and is caught again and is sent to kidnap Helena the Beautiful. He succeeds in carrying her off. With the wolf's help, he brings her and then the magic horse to the tsar who demanded them, but then steals back the girl and the horse, along with the Firebird, before leaving.

It inspired the ballet "The Firebird

" with music composed by Igor Stravinsky.

Compare with "The Fire-Bird, the Horse of Power, and the Princess Vasilissa".