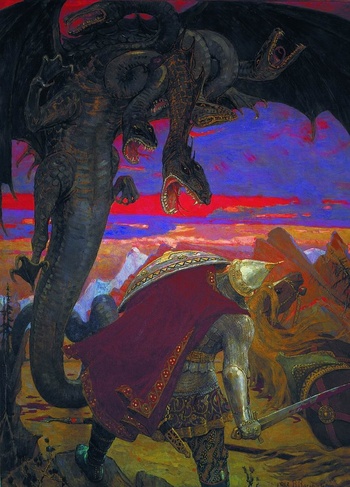 Russian myths and folklore come from two sources: the pre-Christian Slavic paganism, and the legends and tales composed after Russia became Orthodox Christian.

Note that in this context, Russian is used with its antiquated meaning and referring to Kievan Rus', the medeival people from whom also Ukrainians and Belarusians descend.

The pagan myths of the ancient Rus told about a number of gods (mostly nature deities) and many kinds of spirits and faeries. We'll list some of them.

With Christianity becoming widespread, a new legendarium appeared in the Rus — the tales of Bogatyrs,note despite similarity it's not related to Slavonic root for "rich", but to Turkic "bahatur" — "champion" heroic warriors who protected the land from beasts, monsters, and invading steppe nomads. The lays about Bogatyrs are called byliny (a nigh-untranslatable Old Russian word roughly meaning "the stories that did happen"; they are not to be confused with bliny, which are delicious pancakes).note In some Russian translation sources, byliny is considered the equivalent of epic. As in The Epic of Gilgamesh. It is justified, given that both speak of times past and of heroic deeds. Consequently, less serious sources apply "Blind Idiot" Translation to any English phrase that uses epic in the same way Dungeons & Dragons does. Many legendary Bogatyrs were indeed historical persons (the most well known one, Ilya Muromets, is a Russian Orthodox saint). But more obscure legends tell about fictional or even non-human Bogatyrs, such as the giant Svyatogor or the dog-headed Polkan, whose name is a popular dog name in modern Russia. Legends often place Bogatyrs in the court of Prince Vladimir I, much like the knights of King Arthur, ignoring the fact that the historical Bogatyrs lived in different times and could not have met (heck, they could not even call themselves Bogatyrs, because they lived long before the first encounter of Russians with Turkish tribes of polovets. The original slavonic word is horobr).

Ilya Muromets, Alyosha Popovich and Dobrynya Nikitich are the most well known Bogatyrs and, in modern depictions are often shown as a team of three. Early stories, however, did NOT differentiate the Bogatyrs into the "famous trio" and "everyone else" the way modern stories are likely to do. One possible reason for the change is the Three Bogatyrs painting.