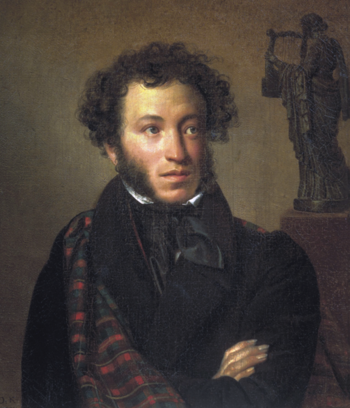 "The unusual thing about Russia is that it reached cultural maturity in the nineteenth century. Russia didn't have the Middle Ages of Dante and Chaucer, the Renaissance of the Italians, or the Elizabethan age of the British. They weren't even sure what language to write in. Pushkin more or less created the Russian literary language, and Pushkin was born in 1799. They were doing for the first time what other cultures had been doing for hundreds of years."
— Richard Pevear
Advertisement:

Alexander Sergeyevich Pushkin (Russian: Алекса́ндр Серге́евич Пу́шкин; 6 June [Old Style 26 May] 1799 – 10 February [Old Style 29 January] 1837) was a famous Russian poet, playwright, and novelist. Revered and studied throughout his home country, his works are held so highly he's often noted as "the Russian Shakespeare".note Within Russian literature, his position is perhaps that of Shakespeare plus Geoffrey Chaucer - poets who wrote before him are basically not important enough to matter. His body of work is as revered and studied in Russia as Shakespeare's is in the English-speaking world.

Much like Shakespeare, he was so badass at writing he actually changed the shape of the Russian language, by basically making up words to fill lexical gaps in Russian, and writing in ways that previously hadn't been even considered in Russia. Without him, we probably wouldn't have Leo Tolstoy, Fyodor Dostoevsky, or Vladimir Nabokov.

It may be correct to call Pushkin the Russian Lord Byron, as this is the role he aspired to. However, his work is immensely more than "Byronic hero meets Slavic gentleman of leisure." Among the genres Pushkin pioneered in Russian culture are: fantasy (or, rather, romanticized Fairy Tale), historical novel, realistic drama. Several extremely indecent poems are attributed to him; an argument for authenticity is his talent for the obscene known by his classmates.

Probably most famous outside Russia for his novel-in-verse Eugene Onegin, and his play Boris Godunov.

Pushkin's personality is a subject of never-ending discussion. Over time, his public image has shifted from talented rascal to noble victim of evil machinations to perfect manifestation of Russian soul to the more "realistic" morally weak person and an extremely talented poet.

Pushkin is probably the most notable African-Russian: his great-grandfather, Abram Petrovich Gannibal, was an African prince from Cameroon or Ethiopia, a former slave adopted as a godson by Peter the Great. Gannibal later became a general and married into Russian nobility, and is often credited with having given Imperial Russia its greatest general, having convinced Alexander Suvorov's father to allow him to enter the military.

Pushkin was a classmate of many notable characters of his generation, including future participants of the Decemberist rebellion of 1825. He was also a friend of several older military officers. His school nickname was "Frenchman", a reflection of his very confused cultural affiliation. As a young aristocratic man, he held a number of civil service positions and performed miserably in all of them, to the point of open mockery of the public good. As a poet and writer, however, he managed to carve himself a professional field that did not previously exist in Russia. Before Pushkin (and a few contemporaries), poetry was either an aristocratic hobby or a part of formal ceremonies. His writings alone managed to move written Russian from templates of Latin and classical German with their heavy and lengthy way of expression, to lively and flexible language to rival French and Spanish. He managed to introduce the previously scorned folk motives and humor, and to show patriotism without the obligatory worship of the state and royal family.

Pushkin did not participate in major political events of his time — he was either carefully kept out of seditious talk by his friends or was thought to be too irresponsible and fragile to be trusted with secrets. The fact that due to the perceived seditiousness of his writings he was one of the people the government watched most closely did not exactly help. In 1820 he was told to leave the capital and forced to a kind of glorified exile first in the Caucasus, then in Odessa, and finally on his family estate at Mikhailovskoye near Pskov. He was only allowed to return after the Decembrist uprising had been put down, one important condition being that he would submit anything he wanted to publish in future to Czar Nicholas I beforehand for personal censorship. He married a very attractive woman, participated in social life and entertainment far above his income level, and left thousands of rubles of debt after his death (later to be paid by the imperial family he despised). Seriously obsessed with duels, he met his death in one, shot by one Georges Danthes. The formal reason was husband's jealousy: Danthes was rumored to be involved with Pushkin's wife. Probably not true and not relevant, since the lady in question was suspected of having affairs before, just not with the people Pushkin could hope to harm and survive the experience. The fact that Danthes (another sensitive young aristocrat living above his means and largely useless in civil service) was Pushkin's usual target for insults and harassment probably had more to do with it.

Thousands showed up for Pushkin's funeral; doubting that Pushkin was anything but the most prominent and perfect Russian became a crime in academic circles until maybe 1980s. His image was used to rally the Russian nation multiple times, most recently in 1999 where many social and political advertisements on television included a countdown to his 200th birthday.

Pushkin's works that have their own page:

Tropes found in his other work include: