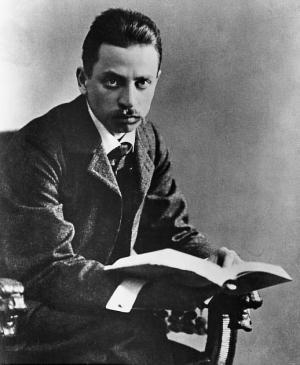 Every angel is terrifying. And yet, alas,
I invoke you, almost deadly birds of the soul,
knowing about you.
Rainer Maria Rilke, Duino Elegies, The Second Elegy (translated by Stephen Mitchell)
Advertisement:

Rainer Maria Rilke (full name: Rene Karl Wilhelm Johann Josef Maria Rilke) (December 4, 1875 - December 29, 1926) was an Austrian poet and novelist, and one of the most famous writers of German poetry (though he also wrote a good deal in French.)

Rilke was born on December 4, 1875 in Prague, then part of the Austro-Hungarian Empire, to Josef Rilke—who became a railway officer after an unsuccessful military career—and to Sophie "Phia" Entz, who came from a well-to-do Prague family. He was sensitive and introspective, and generally had an unhappy childhood; Phia had him dress like a girl in an attempt to cope with the loss of a daughter who died only one week old. He experienced the fracturing of his parents' marriage in 1884; he remained by his father's side.

Josef Rilke believed that his son would benefit from military training, so he sent him to a military academy in Sankt Pölten, Lower Austria, which he attended from 1886 until 1891. Rilke himself fell ill, leading him to withdraw from the military academy and attend a trade school. During that time, his interest in writing grew into a serious pursuit, leading him to publish Life and Songs, his first book of poetry, in 1894. He then attended universities in Prague, Munich, and Berlin from 1896-1899.

In 1897, Rilke met Lou Andreas-Salome, an author and psychoanalyst who studied with Sigmund Freud. She was the wife of a university professor and suggested that Rilke change his name from "Rene" to "Rainer". The two developed a very close friendship, which lasted until the death of her husband. Salome was the daughter of a Russian general, and she and Rilke made two visits to Russia in 1899 and 1900. There, Rilke met its famous creative minds, like Leo Tolstoy, and embraced Russian culture; the visit inspired The Book of Hours, which was published in 1905.

From 1900 to 1902, Rilke lived in Worpswede, an arists' colony in eastern Germany, where he met Clara Westhoff, a sculptor. They married in 1901, and had a daughter, Ruth, who was born later that year. The couple lived apart most of the time, although they maintained a cordial relationship. Rilke relocated to Paris in 1902 to write about the sculptor Auguste Rodin (and Clara, who studied with Rodin, joined him there). However, Rilke had conflicted feelings for Paris, and recounted some of these in the form of the novel The Notebooks of Malte Laurids Brigge, which he published in 1910.

At the outbreak of war in 1914, Rilke was in Munich, and he fulfilled military service in an archive in Vienna. By then, he had begun the Duino Elegies, which he did not complete until February 1922, in the Chateau de Muzot in the Valais. That same month saw the completion of The Sonnets to Orpheus.

Towards the end of his life, Rilke wrote most of his poetry in French, influenced by the poet Paul Valéry, whose work he translated into German. Rilke's final years were difficult, as he developed leukemia, which led to frequent hospitalizations. Rilke eventually died in 1926, at the age of 51, at his chateau in Switzerland.

At the meantime, Rilke was also a prolific letter writer, as many of his letters have been collected in several volumes.

His poetry contains examples of: