Literature / The Private Memoirs and Confessions of a Justified Sinner 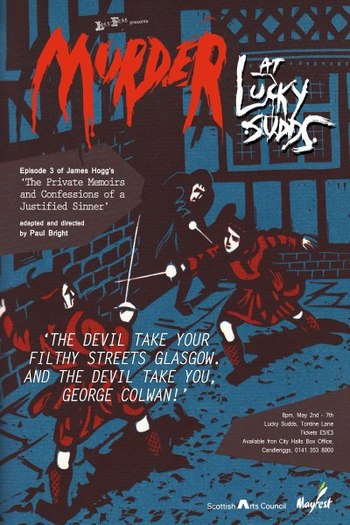 The duel between George Colwan and Gil-Martin, who is disguised as one of George's friends. Robert (in black) looks on between them. Context  In The '80s, the late Scottish performance artist Paul Bright tried to adapt the novel into a series of radical shows based in the actual locations in the book. The poster advertises a 2015 exhibit compiling the material from those shows, which closed out to poor reviews.
Advertisement:
FIDELI CERTA MERCES.
"An assured reward for the faithful one", the motto on the title page of Robert Wringhim's titular memoirs.

It sounds like it ought to be an Awful British Sex Comedy, but in fact James Hogg's Scottish novel dates from 1824 and is thankfully lacking in pinging bras, creaking bedsprings and window cleaners. Instead, this is the tale of Robert Wringhim, the younger son of the Laird of Dalcastle. His father, who he has been raised by his pious mother to despise as an unrepentant sinner, has no time for him. Lord Dalcastle suspects that he is the illegitimate son of his estranged wife and her religious adviser (whose name he shares and who is effectively his stepfather). Robert won't be inheriting anything on his father's death—that's all going to his elder and more popular brother, George Colwan—and he regards himself as an outcast, although his stepfather has assured him that he is predestined to be one of God's elect. Then one day, as Robert walks through the fields alone, he encounters a mysterious and apparently powerful young man called Gil-Martin, who has a few suggestions about how he can sort out all his problems...

The book is Scotland's own version of Faust, and, although Hogg himself was a devout Calvinist, it's a cautionary tale of just how wrong you can go when fired up with the idea that God has guaranteed your salvation in advance. Hogg, who lived from 1770 to 1835, was a former shepherd from Ettrick in the Scottish borders (which unsurprisingly got him the nickname "The Ettrick Shepherd"). He became well-known from 1813 on for writing poetry on Scottish themes in a similar vein to some of that of his friend Sir Walter Scott. He also wrote other novels and short stories, but this tends to be the one that is remembered. For a nineteenth century horror novel, it's unusually subtle. We're not left entirely sure of who Gil-Martin is or even how real he was.