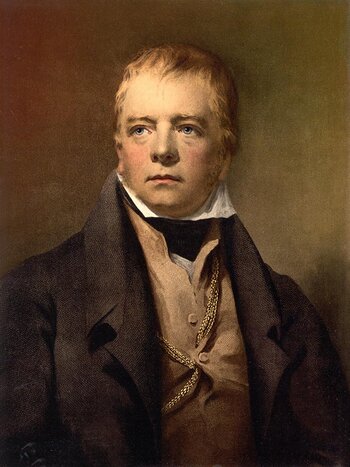 "There is a vulgar incredulity, which in historical matters, as well as in those of religion, finds it easier to doubt than to examine."
Advertisement:

His best-known works include Waverley, Rob Roy, Ivanhoe (which guest-starred Robin Hood and had a significant effect on subsequent portrayals), and The Bride of Lammermoor (which was adapted into a famous opera). Before venturing into prose fiction, which he published anonymously (although his identity was a poorly-kept secret), Scott was a bestselling narrative poet. His later novels were composed under the combined strain of bankruptcy and severe illness.

Arguably the most famous and influential novelist of the nineteenth century, frequently imitated across Europe and in the United States. Among the novelists owing him a profound debt: James Fenimore Cooper, Charles Dickens, George Eliot, Alessandro Manzoni, and Leo Tolstoy.

Works by Walter Scott with their own trope pages:

Adapted works with their own trope pages: