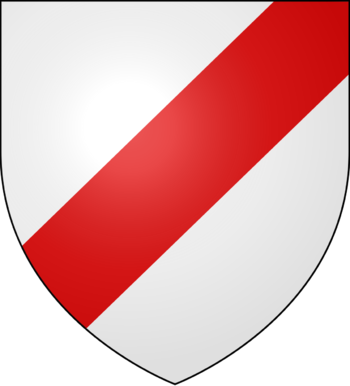 Argent, a bend sinister gules.
A thick band of clouds ran along the horizon. 'A bar sinister,' he said to Penny, pointing.
'What does that mean?' she asked.
'It means some big bastard is creeping up behind us.'
— A Dance with Dragons
Advertisement:

The Bar Sinister is the single most famous element of Hollywood Heraldry, a diagonal line on a coat of arms that indicates illegitimacy. "Sinister" just means that the line starts at the top left, but the connotations of the word may have something to do with the trope's persistence (to avoid embarrassment, it's important to remember that "left" in heraldry means the shield-bearer's left, which is "right" from the point of view of the person looking at the coat of arms).

In reality, there are three things wrong with this:

In modern English heraldry, the most common indicator is a particular type of border around the edge of the shield, borrowed from the Scottish system.

Bestselling historical novelist Walter Scott is the trope creator: his works stuck popular culture with both the idea of the barre sinister as a sign of illegitimacy and the misspelling of "barre". Although completely bogus in terms of heraldry, the concept lives on in the unit badges of some military organizations, as a pictorial way of Getting Crap Past the Radar. A baton sinister is used to imply that members of that unit are, well, bastards. Notably, this use can be seen in the unit patch of the US Marine fighter squadron VMA-214 "Black Sheep"

Not to be confused with Bad-Guy Bar.